The German County Association (“Deutscher Landkreistag”) is the leading association of the 294 German federal administrative districts (Landkreise). The Landkreis sector covers around 96 per cent of the surface area of the Federal Republic of Germany and represents three quarters of the local authorities, who in turn represent 55 million inhabitants or 68 per cent of the German population. The association understands itself as promoter of the rural areas in Germany.

The German County Association is unlike other interest groups (e.g. private sector), as it represents public interest; via the local authorities which are politically responsible to German citizens.

Protection of the local government self-administration on Federal level

The main tasks of the German County Association are to promote local government self-administration (which is guaranteed by the German constitution, network between Landkreise) and foster common interests between all local government bodies vis-à-vis the Federal State and the public.

Though Landkreise – which alongside the municipalities form the 3rd level of the state organisation are assigned to the Länder (2nd level) – they are increasingly concerned with developments on a national level. As most of the German Federal laws are executed by the local authorities, the German County Association participates in the legislation process – as long as the issue concerns local authorities – via the German Parliament (Deutscher Bundestag) or the respective ministries. Additionally, the Association contributes – either in decision-making or in consultation - to the work of several bodies and institutions of the Federal state and the Länder.

One of the most important aims of the German County Association is safeguarding and establishing equal living, supply, working, administration and development conditions in rural areas in proportion to urban areas. The association is especially concerned with sustainable development in peripheral rural areas, covering issues such as demographic change. A further main focus lies within the commitment of the Landkreise as responsible authority for social welfare as well as children and youth social services and local employment policy. 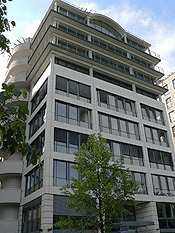 Structure of the Association

There is increasing need for German Landkreise to be prepared for the implementation of European directives and regulations. The German County Association has its own office in Brussels, which represents the interests of the German Landkreise vis-à-vis the European Institutions (above all European Commission, European Parliament and Committee of the Regions). The Association also networks with other local associations such as Association of Polish Municipalities or Association of Finnish Local and Regional Authorities, and contributes to an exchange of experiences as well as to arranging county-partnerships.